If ever there was a meteoric rise in the world of trading cards, it would have to have been in 1989 with the entry of Upper Deck into the baseball card market. Officially, Upper Deck was the 5th manufacturer approved by M.L.B. to produce licensed baseball cards but unlike the previous companies such as Fleer, Donruss, and Score, Upper Deck shot straight to the top of the charts. Upper Deck cards, from year one, were a cut above every other company’s efforts. After all, Upper Deck introduced the pack-inserted autograph (1990) and the game-used memorabilia card (1997) before any of their competitors and are mostly responsible for the ultra, high-end market we have today.

I’ve already written that without the fierce competition provided by those early Upper Deck sets, Topps would not have been pushed to innovate and create products that to this day, rule the world of sports cards. Topps is King, at least until Fanatics takes over, because overnight their historic flagship was made obsolete thanks to 1989 Upper Deck. The problem Upper Deck faced is that once those glory years came to an end and we rolled into Y2k, the momentum in the baseball card market had shifted. Upper Deck failed to secure the rights to Refractor technology and spent the next decade playing catch-up in what eventually became a two-company race.

By 2007, Upper Deck was a company that was self-imploding under Richard McWilliam. What was once a respected brand that was beloved by collectors world wide, had morphed into a company with devastating quality control issues and public relations disasters so short-sighted that it would eventually cause a domino affect that would cost Upper Deck their baseball, football, and basketball licenses. By 2010, the heart and soul of Upper Deck was gone and all that was left was a sad shell of its former self. McWilliam, once a hobby hero, had a front row seat to his company’s demise and watched his world crumble until his death in 2013. By some miracle, Upper Deck carried on.

What we’ve gotten from Upper Deck since their exit from licensed sports is cards with pieces of plants and bugs embedded into them, an entire set of unknown (to most) military veterans, a slew of lackluster Marvel releases, and cards of athletes in suits doing anything but playing sports. Upper Deck has also produced several licensed sets from movie franchises old and new, which have been met with little fan fare but have still managed to sell out. In 2017, Upper Deck produced a Clerks trading card set and eventually followed up with a Chasing Amy release. These type of products have helped keep Upper Deck’s name alive but little known pop culture sets are expensive and won’t keep the lights on.

The only sports license Upper Deck was able to keep was hockey. Upper Deck’s N.H.L products have been a ray of light in an otherwise dark time and have even given some collectors hope that one day Upper Deck would return to the baseball card market. All those hopes were dashed once the Fanatics monopoly was set in place but as long as Upper Deck remained in hockey, all was safe, or so it would appear. Those hoping for the best for Upper Deck now have reason to panic as Upper Deck has canceled several hockey products, while delaying others. To make matters worse, the one product that has brought national attention to Upper Deck, All-Elite Wrestling, has also faced delays, angering many wrestling fans.

You have to hand it to Upper Deck, they have survived twelve very long years after losing their sports licenses in 2009. This hockey cancelation/delay can’t look good in the eyes of the N.H.L executives, especially when there is a company spending billions of dollars and locking down all sports. Only time will tell just how loyal hockey is to Upper Deck but at the moment, things look very bleak. For many years, rumors have been spreading of Upper Deck filing for bankruptcy and of company-wide lay-offs but every year, like the roaches they embed into Goodwin Champions, Upper Deck continues to survive. My question is just how many lives does this once historic company have left? 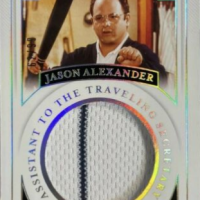