I’m not a basketball fan. In the mid-90s, for a couple of seasons I kept some games in the background while I sorted my baseball cards but that’s about the extent of it. I realize that the sport of basketball is much more fast paced and therefore more enjoyable to watch than baseball but I am loyal to my sport and have been for over three decades and nothing has been able to change that.

That being said, sometimes a card comes along that changes everything and makes you re-consider your collecting decisions and for me, that would 2020-21 Panini Prizm Lebron James #1. It marks off every box that makes a card iconic, including a spectacular photo and well-done design. If you’re an open-minded collector, it also comes with lots of shinny parallels, as well.

Panini America, much like the company they purchased in 2009, Playoff/Donruss, is known for producing a gluttony of cards. There’s over 30 different parallels of this card and an endless amount of unopened Prizm mountains at stores but even with the market over-saturation, I’ve been unable to find a single box to bust open out in the real world. That’s embarrassing considering my significant other is a Walmart vendor.

The last time I felt this way about a non-baseball card was with Fleer/Skybox’s Metal series and one particular card featuring Michael Jordan dunking through a city skyline. At the time, Fleer was owned by Marvel and was at the very top of their game. It’s safe to say that Fleer/Skybox owned the card market in the late-90s and today’s secondary market prices reflect just that. These Jordan cards, in base form sell for hundreds of dollars.

What makes ’97-’98 Skybox Metal Universe so unique is that unlike today’s Panini Prizm with over 30 parallels, Metal Universe had just one. That seems unheard of in today’s hobby. Precious Metal Gems, like the one you see below, were numbered to just 50. With 24 packs per box, they weren’t easy to come by and the few remaining unopened boxes today sell between $8k-$10k a piece with no autograph of Precious Metal Gem guaranteed.

Once Panini is out of American sports (WNBA doesn’t count), all the amazing parallels will eventually make their way into Fanatics sports cards. Fanatics cards will likely all feature premium stock, have similar or better photography than what we see today, and will have team logos and colors. Everything will work itself out and its even likely that the Lebron James Prizm, produced in the millions, will become a far distant memory.

2 thoughts on “Flirtin’ with Basketball” 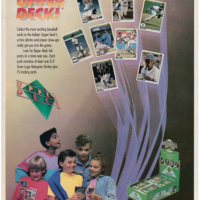