What is this Card Worth to You?

Lately, I’ve become obsessed with eBay in a way I haven’t been in a really long time. I’ve been scooping up one Canseco after another to the point that I have been blessed with almost daily packages from the mail man. However, unlike the biggest Jose Canseco collector on the planet (TanMan), I have been going with lots of 90s parallels and rare inserts and less than desirable autographs that sell for $15 or less. After all, the reality is that Jose’s career is over and his numbers will never get any better … so paying outrageous prices for his cards isn’t the best plan, at least for me. The point is, though, I am having a blast and even though I have an unlimted budget, it feels good to display some self-control in my card spending for once.

That brings me to the Ohtani craze in #TheHobby and while the entire world has been absolutely obsessed and mesmerized with his new-ish 2018 Bowman autographs and parallels, a mythical card hit eBay and was snatched up for an unreal $400,000. The card comes from Bowman (of course) in 2009 to be exact and it is a “one of one” Superfractor parallel of Angels super star, Mike Trout. While I don’t keep track of all the big purchases week in and week out, I would go out on a limb by saying Trout is clearly ranked highest among collectors, well above Aaron Judge and even the “Next Babe Ruth’, Shohei Ohtani. 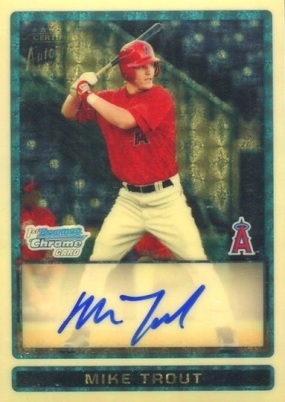 So, let’s talk. A card is only worth what someone is willing to pay. Beckett means absolutely nothing and as I’ve learned on eBay, recent sales don’t mean shit, either. I’ve lost out on a Canseco three weeks in a row of an identically #’d card for $56, $72, and now $51. That’s three big changes in just 21 days. So what’s Trout’s Super really valued at? Is a card from 2009 with several hundred parallel autographs available really worth that much? Is the Superfractor name and brand really worth that much more? Would you invest that kind of money into a 26-year old kid who has been perfect in almost every single season he has played in?

Once again, Trout is off to another monster year so this purchase likely will go down as a victory for now but take it from other people who overpaid for similar Superfractors (Tim Lincecum, Joba Chamberlain), things can go South really quickly. Until the Shohei Ohtani 2018 Bowman Superfractor is pulled, listed, and sold, this Bowman Draft Mike Trout Super is the most well-known and recognized card on the planet and you can bet every single collector is going to keep this sale in their memory just to be able to throw it in someone’s face if Trout ends up following Jose Canseco’s footsteps or worse, Prince Fielder. I really can’t think of anything worse than that.

I am just thankful that Superfractors weren’t around in 1986.

As for the Ohtani Superfractor and the hype behind it, including a $60,000 offer from Blowout Cards; I truly hope the person who pulls it is someone who doesn’t spend thousands of dollars on cards every week because these case breakers and super high-rollers already pretty much get first dibs on all high-end cards. Just look at this guy who has pulled 28 Superfractors in just a few years. We are already fighting the odds placed by these faceless, corporate card companies. It would be nice if the Super was pulled from a lone pack at a no-name local card shop or from a box bought from Blowout or on eBay. For once, I want to see the underdog win out.