It Pays to Shop at Ames 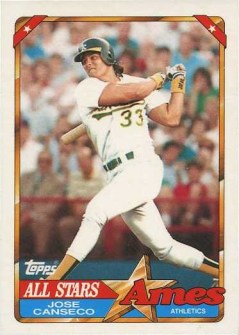 Besides being my very first Jose Canseco card, there is a lot about this Topps-produced, Ames card to delve into. For starters, why did Topps use a much better photograph of Jose, a bonafide superstar in and out of baseball at the time, in an “oddball” set rather than in their own flagship brand?

See for yourself. Topps’ flagship used a lazy photo that I can easily take on my smartphone, had time travel been invented by now. Sure, the flagship has more vibrant colors in its design and photograph but the Ames card has a classic “slugger” swing and a guaranteed, lower print run. Doesn’t matter, though. Both cards today are worthless.

This card was purchased by a mother for her then 10 year-old son at an Ames Department Store in Sunrise, Florida sometime in 1990. This woman’s bratty child was complaining about the store’s lack of WWF wrestling cards when she spotted the 33-card set in a small box and figured her spoiled son would enjoy some playing cards.

The rest, as they say, is history. There were no playing cards in that box. I didn’t find a Hulk Hogan or Macho Man but while flipping through the cards I found the closest thing to a larger than life, WWF character; a young man with giant muscles looking to absolutely decapitate a baseball (or his first wife, maybe).

The Ames set is full of Hall of Famers like Cal Ripken, Jr., Rickey Henderson, Wade Boggs, and more but Topps used photographs that made them look just so ordinary, when compared to the monster I fell in love with that day (#NoHomo). It’s such a great, unique photo, too. It has yet to be recycled for any other trading card to this date.

This set was Ames’ second baseball set, with the first being 1989’s Ames’ 20/20 Club. That set featured much more color and effort in the design department but both sets still gave off that “oddball” vibe which essentially made these cards worth next to nothing. Would you trade a 1990 Upper Deck Bo Jackson for an Ames Bo Jackson?

Ames somehow survived into the early-2000s, but finally ceased all operations in 2002. Today, there is an online Ames Fan Club, believe it or not. Perhaps most fascinating of all is Dan Bell’s video exploring a long-abandoned Ames Department Store with actual unsold product left behind and a hilarious Ames training video.

I would absolutely love to find out how much Ames paid Topps to design and produce either of their two, now-forgotten sets. I’d love even more to know how many sets were produced and delivered, how many sold and just how many did not. This information will never make it outside the offices of Topps Company, unfortunately.

If you have any information to share related to Ames’ Topps sets and figures, please drop me an email anytime at WaxMorgue@gmail.com or leave a note in the comments section.